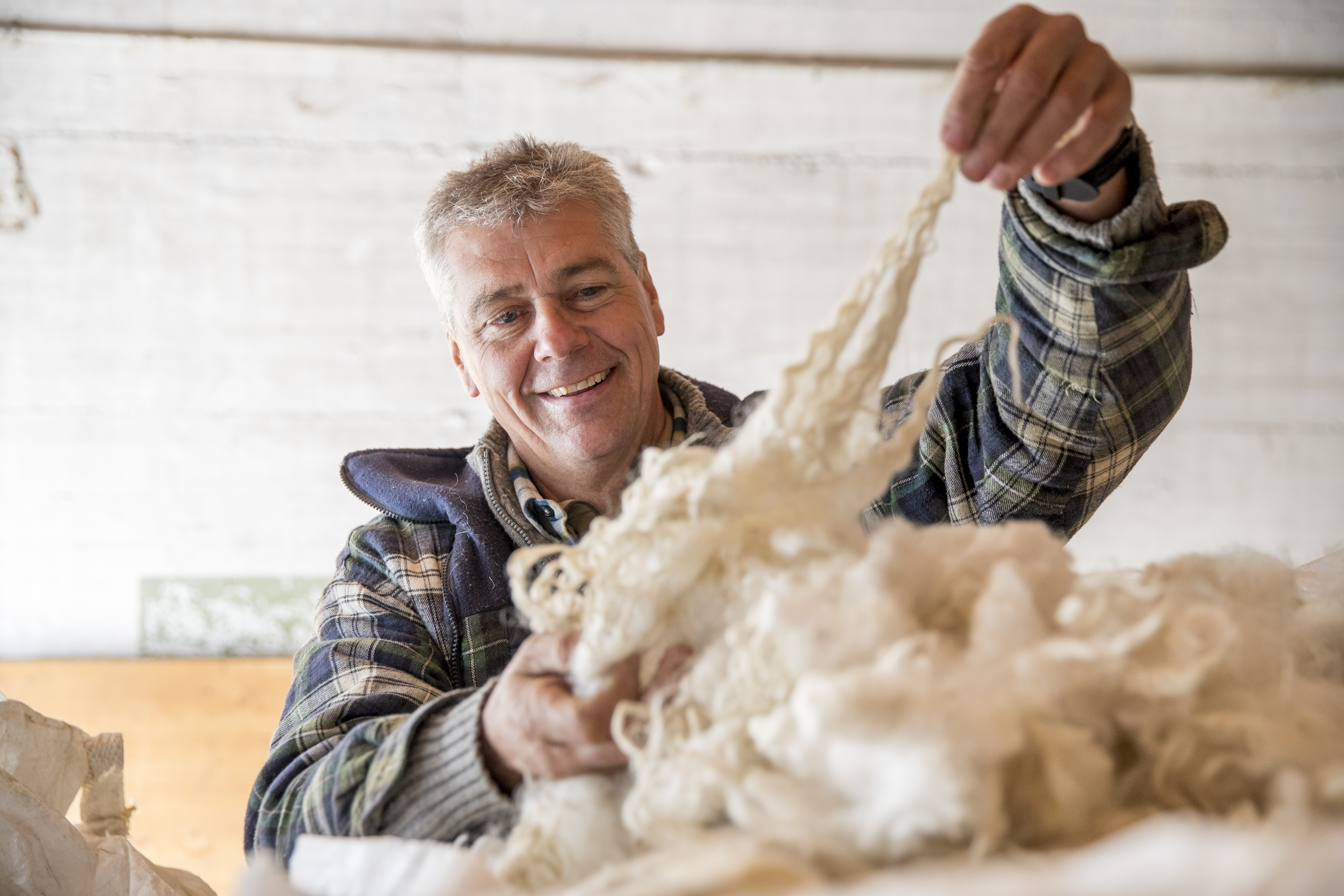 In the barn, out at pasture or on his mobile phone: Paul Julen, sheep farmer from Zermatt, is never far from his blacknose sheep, who are “very close” to his heart.

In the barn, out at pasture or on his mobile phone: Paul Julen, sheep farmer from Zermatt, is never far from his blacknose sheep, who are “very close” to his heart. The ewe is restless.

“She’s going to have two boys, that’s what the ‘Büch’ (belly) tells us”

says Paul Julen, 58. It’s lambing time. The Upper Valais Blacknose Sheep farmer rarely leaves his barn below the Matterhorn in Zermatt before midnight during these weeks. Half of the animals have been back in the barn since October. His herds have spent six months on Hohweng, Hohbalm and Stafelalp around Zermatt. Some find their way back from the pasture to the farm by themselves. “Blacknose Sheep have a memory for places and a sense of time far better than people.” Paul Julen bought his first animals with his brother Rüedi when he was 13 years old. Today, 44 years later, the sheep farmer has over 300 animals on his farm.

The shepherd’s trouser pocket jingles. His mobile ringtone is the sound of his animals’ bells. It’s son Paul-Marc, 35. Since he and his wife, Cindy, 35, took over the Romantik Hotel Julen and Hotel Alpenhof businesses in Zermatt, his father can concentrate fully on his fleecy friends. “Papa loves farming”, says daughter Rebecca, 30, during lunch at Restaurant Julen, the family’s daily meeting place. For years, Paul Julen ran the second generation of the family firm Tradition Julen, with his wife Daniela, 58, and brought together the various branches of the business – gastronomy, hotels and farming. The father of three children still looks after guests at Restaurant Schäferstube. Specialities include 15 different variations on the meat from his Blacknose Sheep.

Everything that Julen produces on his farm is used in his own nine guest houses. He serves the meat in the restaurants, the annual 14,000 to 18,000 kilogrammes of unsorted wool are made into duvets, pillows or covers for the hotels and horns and fleeces are used as decorations. Fridolin the ram decorates the wall in the reception area of Romantik Hotel Julen. Beat is at the taxidermist right now. “I am there for my animals from birth to plate”, says Julen dryly. The sheep farmer from Zermatt eats lamb up to five times a week. “It is not a question of to slaughter or not slaughter, but one of respect.” Respect for his animals while looking after them, during slaughter, during preparation in the kitchen and when eating them. “My father has always been very ideological”, says son Paul-Marc.

Father and son offer tourists tours of their farm every Wednesday during the winter. Up to one hundred people take part. Kids enjoy those tours a lot. They eat dried meat together at the end. As the fat content of Blacknose Sheep is 50 percent lower than other breeds, even the meat of an eight-year-old animal is still very enjoyable. “Parents are often grateful that we teach their children in a natural way that meat comes from animals”, says Paul Julen. His grandchildren Jarno, 8, and Rajan, 6, have long known that the cute lambs will be eaten. “We know that from the name lamb ragout”, says Jarno.

Blacknose Sheep were bred for stony, steep and high Alpine terrain. They were ideal for poor mountain farmers, because the animals could be left alone on the Alps. This left more resources available for hay-making, which meant more feed for the animals and more meat for the family. Every year, Julen makes 140 tonnes of hay for his animals. He farms around 50 hectares, a total of 500 small plots of land.  The Blacknose Sheep give Paul Julen meat, warmth, satisfaction, something to care for and joy. But what do they mean to him? “A great deal. The emotions are sometimes too much for me. Every sheep is ‘very deep inside’.” He taps his heart. He laughs. “Not even my wife can understand it. She says I’m married to my sheep.” He recognises each of his animals by the head which is short and wide in this breed.

Julen looks around and points: this one here always produces good lambs. This one doesn’t walk right. “And this one here is a maximum.” That means that the sheep has achieved the maximum number of points at the local show. The categories – colour features, wool, confirmation and limbs – are worth six points each. According to Julen “part of breeding is also about competition”. It culminates in the award of “Miss Zermatt” or “Wolli“. They are also the only “Owjienis” – ewes – that Julen has given a name. Otherwise this honour only goes to rams and his five-year-old pet sheep, Caroline. Not a maximum, that would just be a dream for her. He goes into raptures about sheep with dreadlock-like fleece measuring up to 18 centimetres in length. “Bänza, Bänza – hela, hela!”, calls Julen in Clinton’s territory. Other rams are called Tyson, Rocky and Berlusconi. They are currently all in one of the separated parts with up to 20 ewes each. Julen keeps accurate records of the pairings. The right feeling makes a true shepherd. That is how Julen knows that the next lambs will be born tonight. And that can take a while. “I don’t have to count sheep in bed any more.”