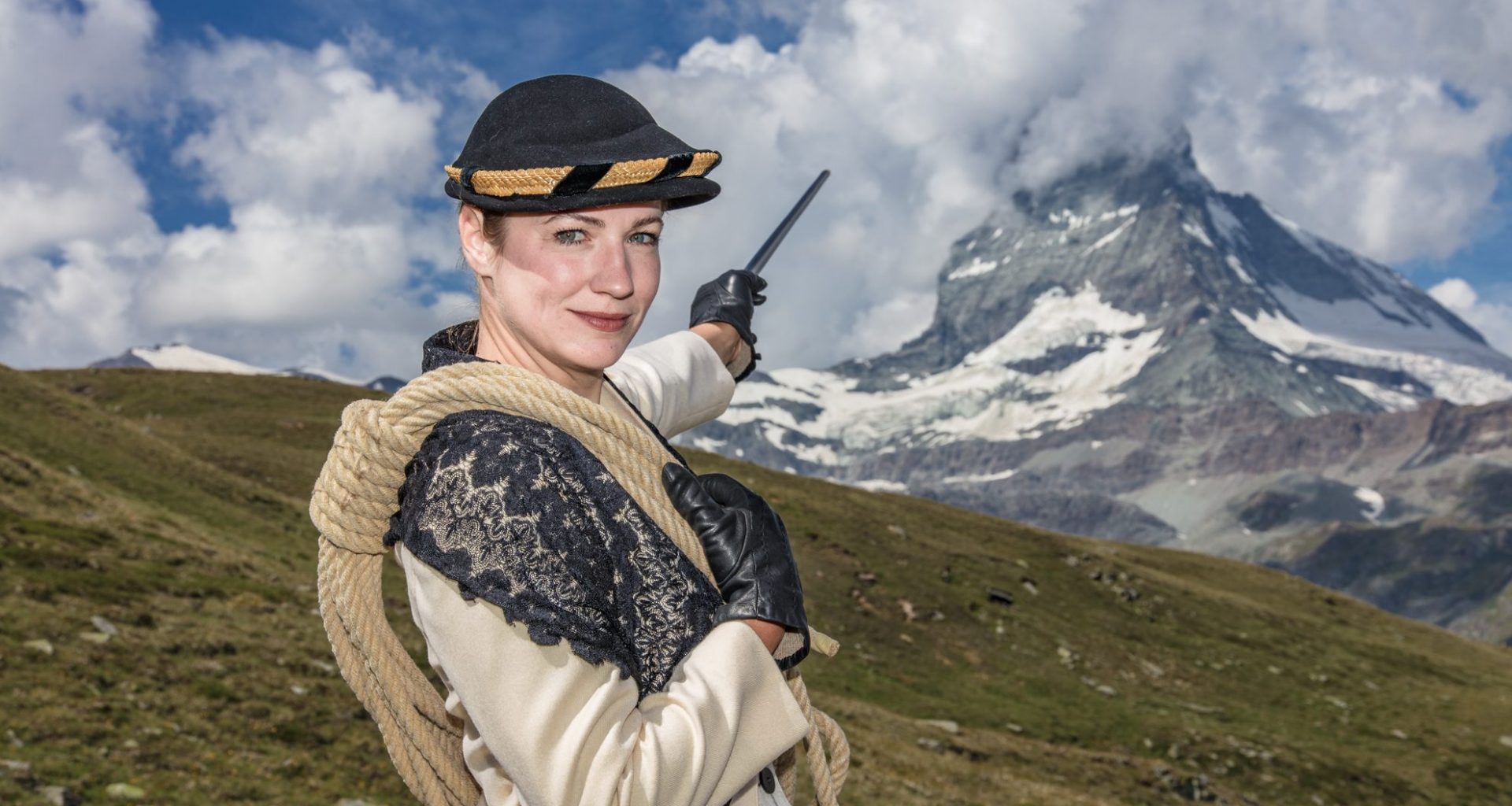 The first woman to climb the Matterhorn

The race to scale the Matterhorn was in the hands of the British Alpine Club some 150 years ago. Six years after the first ascent in 1865 by Edward Whymper from London, on 22 July 1871, Lucy Walker from Liverpool was the first woman to reach the 4478-metre-high summit.

There were exactly 2198 days between them. During this time, only 17 other all-male rope teams reached the summit of the Matterhorn, among them was the mountain guide Peter Perren from the village of Zermatt. He was the first one who had ventured back to “Horu”, as the Matterhorn it is known by locals, after the devastating accident on the first expedition. Four of the seven first mountaineers plunged to their deaths during the descent which was the first dramatic mountaineering tragedy in the Alps.
By way of comparison to Mount Everest, the highest mountain in the world (8848 metres), it is worth mentioning: between the first ascent by Edmund Hillary and Tenzing Norgay on 29 May 1953 and the ascent by the first woman, Japanese native Junko Tabei, a whole 22 years had passed.
This just serves to highlight the outstanding achievement of the woman Lucy Walker (1836 – 1916). While the women on Mount Everest had long been equal climbing partners in the 1870s, for her first ascent Lucy Walker had to consider the morals of society at the time. For a long while, a lady in trousers was simply unimaginable and this meant the female pioneers had to scale the mountain in a hoop skirt. Breaking all the rules, they boldly shed their skirts as soon as the climb began. Under the flannel tucked in their backpacks they concealed a pair of athletic bloomers.

In September 1867, at just 18 years old, Félicité Carrel from Valtournenche in Italy was the first woman ever to attempt the Matterhorn. She did not know about the British bloomers yet. With the support of a group of mountain guides, she dared to attempt the ascent from the resort of Cervinia. After Jean-Antoine Carrel narrowly lost the race for the first ascent against Edward Whymper two years earlier, the locals to the south of the Matterhorn, or “Cervino” in their own tongue, fancied the trophy of the first woman for themselves at the very least. One hundred metres from the summit, Félicité Carrel had to give up. Blustery winds ballooned the brave young woman’s wide hoop skirt and threatened to drag her to her peril. In her honour, the point where she turned back was later named “Col Félicité”.

35-year-old Lucy Walker was accompanied by Frank, her father and Frederick Gardiner when she successfully reached the summit. She was fearless, resilient, persevering and technically adept – something she had proved on countless arduous trips in the years before. She was the first woman to reach the peaks of the Lyskamm and Piz Bernina, and she even achieved the accolade of the first ever ascent of the Balmhorn. The Bernese Oberland mountaineering legend Melchior Anderegg (1828 – 1914) was a constant companion on her expeditions and he often travelled with the Walker family for weeks on end, commanding their complete trust. Coming from a wealthy merchant family in Liverpool, alongside father and daughter, Lucy’s brother Horace had also been seized by the climbing obsession. With their accomplishments, the Walkers were among the defining figures in mountaineering in the second half of the 19th century. As well as evading the dress code of the times, Walker carved out her own path in the face of many other reservations and prejudices. Because the high-class British Alpine Club was exclusively reserved for male members, she became involved in the founding of the “Ladies’ Alpine Club” for which she also served as President.

Melchior Anderegg – the key to success

Alongside the two Walkers and Frederick Gardiner, the triumphant rope team included five mountain guides. Naturally the “expedition leader” was Melchior Anderegg, the Walkers’ confidant. The “gentleman and pioneer” from Meiringen, as Natascha Knecht describes him in his biography, was one of the best of his time. As an Alpine ibex hunter, he first discovered climbing in the Grimsel region and swiftly developed the passion from there. He soon conquered the most challenging routes and achieved numerous first ascents which did not go unnoticed by the adventure-hungry Brits. The ambitious Englishmen saw Anderegg as their key to success in conquering the Alpine peaks.

This ultimately led Lucy Walker to her victory atop the Matterhorn against her major rival Marguerite Claudia Brevoort (1825 – 1876), who was referred to as Meta. From a leak in 46-year-old Meta’s camp, Anderegg had learned that she intended to attempt the Matterhorn and was already on her way to Zermatt. The American woman was in excellent form in 1871 and on the mountaineering scene she had been given the confidence to climb the Matterhorn. Living in England, she had spent the whole summer in the Alps. To demonstrate her achievements, Brevoort already had Mont Blanc under her belt and was the first woman to summit the Grandes Jorasses, the Dent Blanche, the Weisshorn and the Bietschhorn. She also managed the first winter ascent of the Wetterhorn and the Jungfrau. Meta Brevoort’s Melchior Anderegg came in the shape of Christian Almer. She had this mountain guide to thank for most of her successes; he was also one of the leading trailblazers in mountaineering at the time.

The competitor trailed behind

The Walkers had just returned with Anderegg from a failed ascent of the Weisshorn as word spread of Brevoort’s plans in Zermatt. They sprang into action to put together a rope team and set off in the direction of the Hörnligrat route. With ideal conditions, the ascent was smooth and uneventful. To this day it is not entirely clear whether the first woman finally reached the Matterhorn summit on 21 or 22 July 1871. Most sources state 22 July as the actual date. In any case, on that day a telegram from Zermatt reached various editorial offices all over the world to announce the great mountaineering milestone in Alpine history. Lucy Walker herself regarded 21 July as the summit day.

One thing was for sure, Meta Brevoort was too late. She arrived in Zermatt the day after the Walker’s triumph… and is said to have commented on her shock that the summit trophy had been snatched from under her nose. The two greatest female mountaineers of their time met in Zermatt for the first and only time in person. The runner-up showed her strength of character by congratulating her rival. Her own response came a few days later, with the first crossing of the “Mountain of Mountains” from Zermatt to Cervinia.

On the south side, she had already become more closely acquainted with the Matterhorn for the first time in July 1869. With her guides, she had climbed up over the Italian ridge to the Balma della Cravatta, a hut at 4130 metres. Nothing seemed to stand in the way of her success any longer. Due to bad weather, however, the venture had to be cut short and the rope team returned to Cervinia without achieving their goal.

The story told on screen

Lucy Walker was celebrated in the international media for her first ascent of the Matterhorn and there were even poems dedicated to the “Climbing Girl”. The story was retold on screen by the BBC in 1986, with English actor Jenny Seagrove playing Lucy Walker. The role of Melchior Anderegg was played by Swiss actor Oliver Tobias.

The relationship between the British lady and the mountain guide from the Bernese Oberland remained steadfast. For twenty years, they both undertook major climbing trips and between 1859 and 1879 they put together 98 mountain and glacier expeditions. With only one exception, Anderegg was always Lucy Walker’s climbing companion. A profound friendship had developed between the two and some sources claim that Lucy Walker had fallen in love with the handsome Anderegg. But she always respected that her mountain guide was married – and remained single herself. The deeper relationship remained a mystery. What is certain is that the two continued to keep each other company when the days of scaling the highest peaks were over. Anderegg visited Lucy Walker, who travelled to Switzerland for the last time in 1901, on several occasions during her holidays in Mürren. The two of them could also be seen on trips together in Zermatt. When asked what he was doing there, Anderegg reportedly said to the English mountaineer William Martin Conway: “I am gradually getting too old for such strenuous mountain climbs. That’s why my next mission is searching for flowers with the ladies…”.

The text was published in the Zermatt Magazin 2021 by Valmedia (www.valmedia.ch) 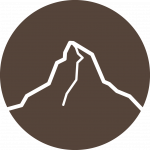