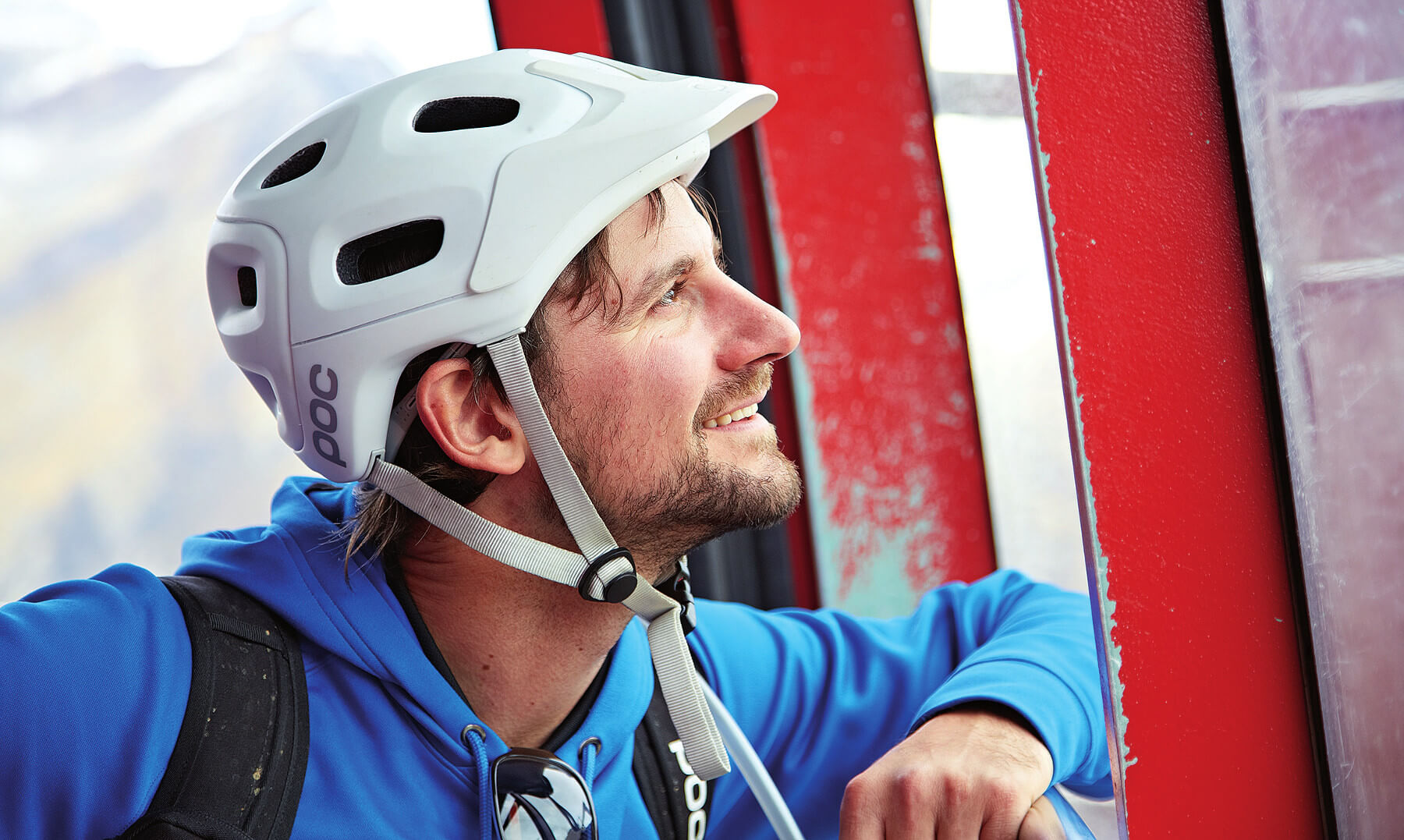 Adrian Greiner, CEO of the planning office BikePlan, is helping to develop Zermatt as a biking destination. We talked to him about the different topics on biking at the foot of the Matterhorn.

It’s hard to say. I think it’s less a case of enemies or opponents, and more about attitudes. Our challenge lies in trying to achieve a consensus. Mountain biking is still relatively new, and ten or even five years ago it was not the same as it is today. Back then, the mountain railways saw great potential in downhill biking, but that’s no longer the main target clientele, as proved by the market figures. The downhill segment only makes up at most 5 percent of the market. The old enemy stereotypes are no longer relevant to the present day situation – so one of our key tasks is revising and altering these perceptions by demonstrating the wider potential of this sport.

So it’s all about leisure bikers?

Exactly. The average biker is now over 40 years old. He usually has a family, is often into hiking, plays various different sports and enjoys skiing. What many destinations lack – if you compare trails with pistes – are the red and blue leisure trails and the corresponding infrastructure. To date, the only two options for mountain bikers were to start riding at an extreme level or to stop altogether. We want to move away from that model and provide access to Zermatt for as many amateur mountain bikers as possible.

Your planning office has been supporting Zermatt since 2014. What is the current situation?

There is still a lot of old infrastructure, such as gravel roads. People used to think that bikers were either Downhillers or Cross Country riders. Downhillers went mountain biking for the adrenalin and Cross Country bikers for the sweat. Now, however, we talk about mountain bikers who go out purely for pleasure and as a way to experience nature. The leisure bikers go to restaurants and appreciate a good infrastructure that allows them to travel from A to B in this enormously beautiful region and to see the landscape from different perspectives – without spending the whole time bathed in sweat.

A whole range of different measures have been implemented in the last two years. For example, there is the new Moos Trail below Furi and the Zermatt–VispTrail. But I guess it took ages for these trails to be set up?

Yes it did, and the different interest groups were all involved in the process. The concept met with consensus on a strategic level. Then it was time for the detailed planning. That’s when the farmers and landowners entered the debate, along with environmental protection etc. That was a big challenge. We tried to find a good compromise without detracting from the end product. In the past we often chose the easiest compromise and went for a gravel track, but that’s not what modern mountain bikers want.

What is the potential of Zermatt as a mountain bike destination and how many Single Trails would you like to see?

The potential is huge because Zermatt scores so highly in terms of the natural experience, its restaurant culture and the almost unlimited transport options. This is perfect for leisure bikers, who want adventure-light rather than adventure-extreme. Where the planned Single Trails are concerned I can only say that once Zermatt has been transformed into a mountain bike destination it will set a new benchmark in the entire Alpine region.

Walking trails are accessible to bikers in the canton of Valais unless they are subject to a specific ban. However, the tourism associations cannot simply advertise walking trails as mountain bike routes. Our plan in Zermatt is to take a slightly different approach: We want to channel the mountain bikers along new mountain bike trails so that they are not everywhere, even if you can’t stop some of them from using the hiking trails. We would rather create new options instead of issuing bans. We want to channel guests by making it fun for them. That requires market-oriented planning. We need appropriate, broad and sustainable trails, and that takes up space. I believe that this is the price we have to pay in terms of making our landscape accessible so that children and families can also use these trails.

“In the end it has to be right for everyone, and especially for hikers.”

How do you view the expertise of the people in Zermatt in terms of mountain biking? There are not that many specialist guides and only ten properly equipped hotels.

The support services depend on the trails, as these are the multiplying factor. The infrastructure has to be there, and then the rest – the auxiliary and value adding services – will follow. There is a great willingness among service providers in Zermatt. That’s why the local Commune of Zermatt has initiated a project called “Fachstelle Bike”, which is aimed at coordinating the different elements of the biking-oriented developments in the resort. In summer 2017, for example, there will be new one-day and two-day tickets for the entire summer region. It’s a complex process to get all stakeholders and interest groups to come together and follow a common strategy. But that’s when things start to happen. In the end it has to be right for everyone, and especially for hikers.

Do you go hiking?

Yes, I was a hiking guide, and even spent time as a trekking guide in the Himalayas. My wife is training to become a hiking guide. We go walking and biking with our children.

At EuroBike 2016 in Friedrichshafen, the world’s largest trade fair for bikes, you presented a report on the Zermatt project. What was the wow factor for your audience? Apart from the Matterhorn.

The fact that Zermatt wants to do it really well. That things are being approached in a coordinated and sensitive way. Nobody is going it alone. It is all being properly planned, which takes time. At the same time, unlike other destinations, things are moving fast. We are creating a sustainable product, which consists of one third environmental, one third social and one third economic aspects. We are doing pioneering work in Zermatt.

Adrian Greiner was born in Emmental but lives in Zermatt. He is a professional spatial and scenic designer and a guiding expert for Swiss Cycling, the national cycling association of Switzerland. As CEO of BikePlan AG he runs a planning office based in Visp und Zermatt dedicated to bike-oriented resort development.

Zermatt offers ten marked mountain bike tours covering all grades of difficulty and extending for a total of 100 km. In 2016 the Moos Trail was opened between Furi and Zermatt. Suitable for children and adults alike, the so-called Flow Country Trail runs for 1,3 km, has an average gradient of 7,3% and falls just 95 metres in height, making it the flattest trail in Switzerland. Another newcomer is the 37 km, medium-difficulty Zermatt–Visp mountain bike trail. Eight more marked mountain bike trails, most of which run on gravel roads, lead to and from destinations including Rothorn, Gornergrat or Schwarzsee.

A lot has been done in Zermatt in the last two years to expand the range of supplementary measures: There are hotelleriesuisse certified bike hotels, bike holiday homes, bike guides and bike schools. Not only does Zermatt has its fair share of biking expertise, but it is also well equipped to teach the art of mountain biking. Various bike shops rent mountain bikes and kit, offer repair services and sell a wide range of equipment and spare parts. The transport options on the mountain, on the railways and in critical places such as Täsch are second to none. Attractive Combi rail tickets for mountain bikers are an additional lure in this superlative mountain biking paradise Zermatt.

Last but not least, Zermatt Tourism offers comprehensive information on its homepage, over the counter and in a dedicated mountain biking brochure.